The detention of migrant children in the USA evades accountability through two primary methods: secrecy and claims to legitimacy by branding detention as "shelter" and "care." LVSN has spent years researching the so-called Unaccompanied Alien Children program to combat both its secrecy and mythology of "care" and expose the system for what it is -- the imprisonment of children. These are the sources we have found most useful to understand how and why the system operates and to disprove the myths that detention is a needed humanitarian intervention benefiting the children.

COVID-19 RELATED RESOURCES:
BRIEF INDEX OF RESEARCH ARCHIVES:
​
You can click the links in this index to go directly to the webpages for each individual source. Continue scrolling down on this page to see each of these sources laid out with commentary on how they've been useful for collective struggle.

​Additionally, here is a short film called "Seeing You" that José collaborated with LVSN to make in September 2020. The film follows an intimate altar-building ceremony bridging two locations within six blocks of each other: Touhy Park and the International Youth Center, the facility where José was detained. The film chronicles José’s memories as well as the transformation of the walk between public park and detention facility into a pathway for ceremony, protest, and creative expression in solidarity with detained children and the communities they are disappeared from.

On August 20th, 2019, It's Going Down published the testimony of a former "Family Reunification Specialist" at a Heartland-run detention center. The testimony of Ramona Benitez is illuminating in many ways, but is especially powerful in debunking the claims by Heartland and the federal government that detention is necessary for the children. In her own words: "All the official language used to describe the apprehension, detention and processing of these children is misleading: it is meant to give the impression that these children were lost from families, that they have no families or communities in the US ready to receive them, and that they require the intervention of state agencies to 'rescue,' 'care' for them, offer them 'shelter' and reunite them with families. This is false. Majority of these children have communities and family members trying desperately to reunite with them, but the US government has found a way to sabotage their efforts and detain them unnecessarily, and I can tell you exactly why and how." You can read the testimony HERE on It's Going Down or download the PDF below.

On September 6th, 2018 ProPublica published the investigative article As Months Pass in Chicago Shelters, Immigrant Children Contemplate Escape, Even Suicide. The research probed confidential documents from Heartland's facilities and provides an unflinching glimpse at the reports from inside, seriously cracking the veneer that children's experience in these "shelters" is "basically like summer camp." As the article states in its introduction: "ProPublica Illinois has obtained thousands of confidential records about the nine federally funded shelters in the Chicago area for immigrant youth operated by the nonprofit Heartland Human Care Services — some dating back years, others from as recently as last week. The documents provide a sweeping overview of the inner workings and life inside one of the country’s largest shelter networks for unaccompanied minors, including children separated from their parents under the Drumpf administration’s zero-tolerance policy. While the records focus on Illinois shelters, they provide a rare glimpse of a secretive detention system that holds children at more than 100 sites across the country. They include descriptions of serious incident reports filed with the federal government, caseworkers’ notes on family reunifications, employee schedules, daily rosters, internal emails and more. The documents reveal the routines of life inside the shelters, days punctuated by tedium and fear as children wait and wait and wait to leave. They spend their days taking English lessons and learning about such peculiarities as American slang, St. Patrick’s Day, the NFL and the red carpet fashions at the Academy Awards. They complain about the food and mistreatment by staff. And they cry and write letters and hurt themselves in despair."

These two resources help us "follow the money" and understand the funding of migrant child detention in Chicago. The first resource, the TAGGS database, contains a complete breakdown of federal funding for the Unaccompanied Alien Children Program and reveals the following useful starting points:
The second resource, ProPublica's Nonprofit Explorer, shows tax documents for Heartland Human Care Services, Inc., the division of Heartland Alliance through which the child jails are operated. These records demonstrate the increase in profits and executive salaries as Heartland's federal funding for child jails has increased from $1.6 million in 2013 to $47.8 million in 2020. Every year since 2018, the president of Heartland Alliance, Evelyn Diaz, has had a yearly salary of over $400,000 (see pictures below.) 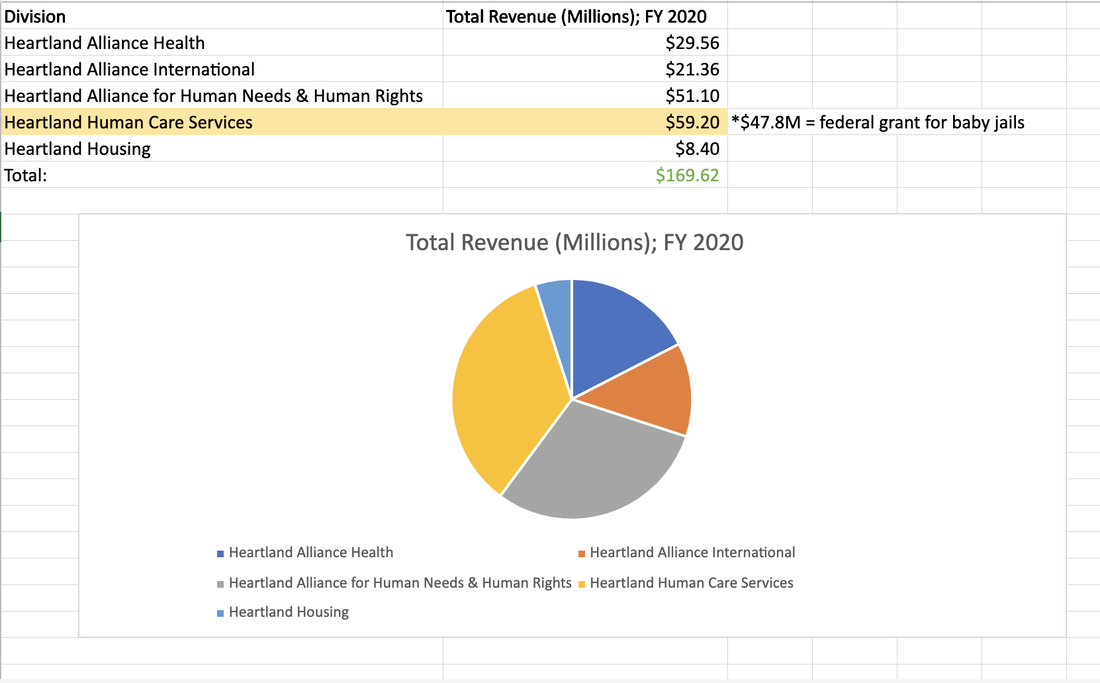 From our companerxs at the Moratorium On Deportations campaign, this article from June 2018 provides an extensive analysis of the use of migrant children as pawns in a political game that "turns migrant people into an experiment in non-personhood and detainability." Read the article HERE.

​You can also read Moratorium on Deportations commentary on the 2014 surge of migrant detention here -- The Border Is the Problem: Resisting the 'Humanitarian' Solution to Child Migration.

Records of Congressional hearings concerning the Unaccompanied Alien Children Program reveal a Department of Health and Human Services director highlighting that the majority of detained children had family members in the US who were trying to claim custody of them – directly refuting Heartland’s claims that these children have nowhere else to go. These hearings also present data on the scope and scale of migrant child detention in the US. (PDF coming soon)
Powered by